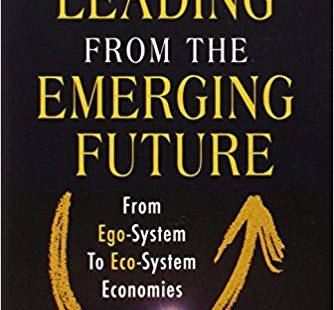 Leading from the Emerging Future: From Ego-System to Eco-System Economies

Breathing life into a dying system

■How to lead from the emerging future?

The more dramatic changes in our environment, the less we can rely on past patterns, and the more we need to pay attention to emerging future opportunities

1.In the face of disruption, how do we lead from theemerging future?

2.What evolutionary economic framework can guide our journey forward?

3.What strategies can help us to function as vehicles for shifting the whole？

ecological divide : disconnect between self and nature

social divide : disconnect between self and other

spiritual-cultural divide : a disconnect between self and Self, that is, between one’s current “self” and the emerging future “Self” that represents one’s greatest potential.

■Structures: Systemic Disconnects That Give Rise to Symptoms

the financial and the real economy

infinite growth imperative and the finite resources of Planet Earth

the Haves and the Have Nots

governance and the voiceless in our systems

The state-centric model, characterized by coordination through

hierarchy and control in a single-sector society.

The free-market model, characterized by the rise of a second

(private) sector and coordinated through the mechanisms of

The social-market model, characterized by the rise of a third

(NGO) sector and by negotiated coordination among organized

The co-creative eco-system model, characterized by the rise of a

fourth sector that creates platforms and holds the space for cross-

sector innovation that engages stakeholders from all sectors

To paraphrase the quote above attributed to Einstein, we cannot solve the current 4.0 type of eco-system problems with the 2.0 and 3.0 ego-system thinking that created them.

1.0 Economic Operating System is based on traditional awareness and hierarchical thinking

2.0 Economic Operating System is based on ego-system awareness and me-centric thinking

3.0 Economic Operating System is based on institutional stakeholder awareness and some negotiated coalitions that internalize concern for the well-being of key stakeholders.

■Sources That Give Rise to Mental Models, Structures, and Symptoms

The journey from ego-system to eco-system awareness, or from “me” to“we,” has three dimensions:

(1) better relating to others

(2) better relating to the whole system

(3) better relating to oneself.

■Thory U – Shifting the inner place from which we operate

O’Brien said: “The success of an inter-vention depends on theinterior conditionof the intervener.” We might say it this way: The success of our actions as change-makers does not depend on what we do or how we do it, but on the inner place from which we operate

the quality of the source (or inner place) from which we operate in “the Now” tends to be outside the range of our normal observation, attention, and awareness

Presencing is a blended word combining sensing (feeling the future possibility) andpres-ence(the state of being in the present moment). It means sensing andactualizing one’s highest future possibility—acting from the presenceof what is wanting to emerge